On January 18th 2018, the European Parliament will vote on its new distribution of MEPs per Member State after Brexit. 73 MEPs are elected in the UK. These 73 seats can either be dropped or reallocated across countries or even in a transnational list. In an earlier paper, we have calculated the implications of various reallocation options for measures of representativeness of the European Parliament. We showed that while the European Parliament is highly unequally representing EU citizens, significant improvements can be achieved while still staying within the constraints set by the EU treaties.

In this post, we present the political choices that the European Parliament is currently negotiating and show what they mean for equality of representation. We conclude with our own proposals.

While degressive proportionality was satisfied for the 2009 elections, the reallocation of seats decided for the 2014 elections did not respect that principle anymore, focusing instead on limiting each Member State’s loss of seats. Given the different growth rates of national populations over the past 4 years, the situation worsened and more states do not respect degressive proportionality.

The AFCO committee has seven amended versions under discussion. The implications of all proposals for allocation of seats across countries is presented in the table below. But what are the implications of the proposals for equality of representation? We present two measures regularly used by political scientists; the voting Gini coefficient and the index of Malapportionment. The former measures the degree to which representation differs from equal representation, i.e. one man one vote. Malapportionment measures the percentage of seats that must be reallocated in order to achieve equality of representation.

In all the proposals made by members of the committee, the new composition of the EP ends up more electorally unequal than the pre-Brexit situation, by both measures (cf. Table 1)! For example, the base AFCO proposal is 3.0% and 4.8% more unequal than the current situation when measured by Malapportionment and voting Gini respectively. While it is designed to satisfy degressive proportionality as mentioned above, it actually results in more inequality than simply withdrawing the 73 British seats from the Parliament (also proposed). When comparing the different proposals among themselves, we see that the one by Guy Verhofstadt (proposal in Amendment 141) performs the best by far in terms of electoral equality.

While all these versions ensure that no Member State loses any seat, there is a lot to gain from more courageous proposals. Kalcik & Wolff (2017) have shown that without any Treaty change, the European Parliament could achieve inequality scores much lower than the current situation. After updating their widget with new population data, we likewise find that the Parliament could be up to 26.8% less unequal when allocating seats in order to minimize Malapportionment. When allocating seats to minimize the Voting Gini, we can find an allocation 19.7% less unequal. Both allocations respect the constraints of the EU treaties and are based on a Cambridge Compromise formula, widely accepted by experts as a basis for allocation proposals. The resulting compositions are detailed in the columns “Minimizing Voting Gini” and “Minimizing Malapport.” in table 1 below.

This would however require several member states to lose more than 1 seat, a politically difficult bargain. Still, when limiting each member state’s loss to 1 seat maximum and a total size of 700 seats -as in the base AFCO proposal-, the EP’s Malapportionment can shrink by 13.7% and its voting Gini coefficient by 8.3%, without any change to the EU treaties. It also improves on the current situation by correcting some of the existing divergences from degressive proportionality. The resulting composition is detailed in the column “Limited Loss” in the table below. Other compositions are of course possible, each more or less politically feasible and performing differently against inequality measures and other criteria. The updated widget is available below so that readers can compare and compute other proposals. It also enables exploration of proposals that would require change in the European treaties, as might be the case for the 2024 elections, and also allows to design a transnational list. 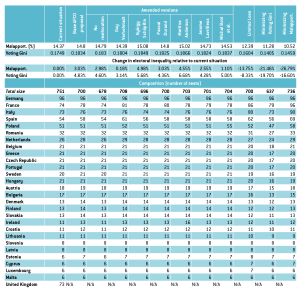