An important question has emerged this week as regards the role of the ECB as a lender of last resort to banks in Greece. The press has widely reported Greeks withdrawing cash from their deposits as well as shifting deposits to other countries. The ECB therefore increased its amount of Emergency Liquidity Assistance (ELA) from 60 billion to 65 billion. This has triggered negative reactions from conservative German economists, among them Hans-Werner Sinn in the FT, arguing that ELA should be much more limited than that.

So what are the theoretical and political limits to liquidity provisioning by the ECB? In a normal bank-run, a central bank needs to provide unlimited liquidity to allow all depositors to withdraw their cash if they wish to. For the Greek banking system, the theoretical limit would be the size of all deposits. The graph below shows the deposits in billion and in percent of total assets. The Greek banking system has a pretty large deposit base of 243.8 billion (December 2014) which is 61% of the total size of the balance sheet of 397. billion. This deposit base has come down since January 2012, when it was still above 75%. 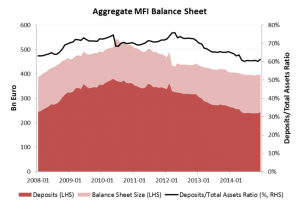 So could the ECB go ahead and just fund the 243.8 billion with ELA? This is a tough call and my answer would clearly be “it depends”. If there is certainty that Greece stays in the euro, its banks remain solvent and a political compromise is reached, then the answer is an unambiguous “yes”. More problematically, if there is a clear political consensus that no agreement between euro area partners can be found, then the ECB cannot provide unlimited funding. The reason is simply that the ECB would know that in the case of a certain exit, the Greek banks would be insolvent as the economy is collapsing and therefore the value of the assets of the banks would be inferior to the liquidity provided. And even if Grexit wasn’t certain but government default was, parts of the banking system would be insolvent requiring limits on ELA.