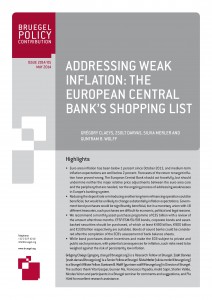 There are clear benefits to price stability. High inflation can distort corporate investment decisions and the consumption behaviour of households. Changes to inflation redistribute real wealth and income between different segments of society, such as savers and borrowers, or young and old. Price stability is therefore a fundamental public good and it became a fundamental principle of European Economic and Monetary Union. But the European Treaties do not define price stability. It was left to the Governing Council of the European Central Bank (ECB) to quantify it: “Price stability is defined as a year-on-year increase in the Harmonised Index of Consumer Prices (HICP) for the euro area of below 2%”[1]. The Governing Council has also clarified that it aims to maintain inflation below, but close to, two percent over the medium term, though it has not quantified what ‘closeness’ means, nor has it given a precise definition of the ‘medium term'[2]. The clarification has been widely interpreted to mean that the actual target of the ECB is close to, but below, two percent inflation in the medium term.

In the current European circumstances, low overall euro-area inflation implies that in some euro-area member states inflation has to be very low or even negative in order to regain competitiveness relative to the core. The lower the overall inflation rate, the more periphery inflation rates will have to fall in order to achieve the same competitiveness gains. Given that wages are often sticky and rarely decline, significant unemployment increases can result from the adjustment process. In addition, lower-than-anticipated inflation undermines the sustainability of public and private debt if the debt contracts are long-term nominal contracts. For governments, falling inflation rates often mean that nominal tax revenues fall, which makes the servicing or repayment of debt more difficult.

Inflation in the euro area has been falling since late 2011 and has been below one percent since October 2013. Core inflation, a measure that excludes volatile energy and food price developments, has developed similarly. Five of the 18 euro-area member countries (Cyprus, Greece, Portugal, Slovakia and Spain) are already in deflation. Even in the countries that are not in a recession, such as Belgium, France and Germany, inflation rates are well below the euro-area target of close to but below two percent. More worryingly, the ECB’s forecast suggests that inflation will not return to close to two percent in the medium term.

Given the need to regain competitiveness, lower-than-target inflation in the euro-area periphery can be expected and is even desirable. However, to facilitate adjustment and achieve the overall ECB inflation objective, inflation in the euro area’s core countries needs to stabilise and reach levels above two percent. A key question for policymakers is therefore why inflation rates are subdued in core countries despite very accommodative monetary policy conditions and the gradual revival of economic growth. Policymakers must also consider which monetary policies are suitable for increasing aggregate inflation in the euro area, while ensuring that the inflation differential between the core and periphery remains. Finally, unresolved banking-sector problems are making the task of the ECB more difficult.

It is against this background that we discuss monetary policy options to address low inflation in the euro area. Evidently, structural and banking policies, wage-setting mechanisms and fiscal policies also need to play a role in addressing the recession and the low-inflation problem. They are, however, not discussed in this Policy Contribution.