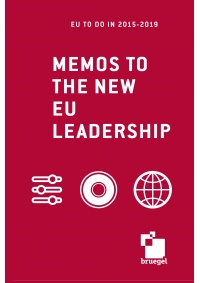 ‘There is now a distinct possibility that this crisis will be remembered as the occasion when Europe irretrievably lost ground, both economically and politically’. This was the starting sentence of our memos to the new EU leadership five years ago. Five years later, it is fair to say that this possibility has become a reality. Unemployment has reached record levels and growth has disappointed. Meanwhile, the world outside the EU has continued to change rapidly. Emerging markets in particular have increased their weight in the global economy and in decision making.

The new EU leadership – the president of the European Commission and his team of commissioners, and the presidents of the European Council and of the European Parliament – will have to address pressing challenges. Despite the significant steps taken by Europe – among them the creation of a European Stability Mechanism, the start of a banking union, the strengthening of fiscal rules and substantial structural reforms in crisis countries – results for citizens are still unsatisfactory. It is impossible to summarise all the memos in this volume but a common theme is the need to focus on pro-growth policies, on a deepening of the single market, on better and more global trade integration. Reverting to national protectionism, more state aid for national or European champions – as frequently argued for by national politicians – will not be the right way out of the crisis. On the contrary, more Europe and deeper economic integration in some crucial areas, such as energy, capital markets and the digital economy, would greatly support the feeble recovery. But in other areas, less Europe would also be a highly welcome signal that the new European leadership is serious about subsidiarity. Internal re-organisation of the European Commission to ensure that it better delivers would also be welcome.

Beyond the pressing challenges – above all crisis resolution, jobs and growth – the memo to the presidents recommends that the new EU leadership should make sure that Europe makes the necessary treaty changes to strengthen Economic and Monetary Union and to permit the coexistence within the EU of countries belonging to the euro area and those that have no intention to join it. Working towards a consensus on this within the European Council and with European citizens is crucial for Europe’s future and to enable bold decisions on pressing issues.

Our focus in these memos is on economics. But clearly, political and other challenges have multiplied in the last five years. We therefore offer strategic policy advice that we deem both sensible given the problem at hand and politically achievable.

Regrettably, we have unexpectedly not been able to include in this volume a memo to the new Commissioner for Employment and Social Affairs. Yet, we believe that this Commissioner will have the major task of setting out how to improve Europe’s employment and social performance. In many countries, labour market institutions need to be modernised, for instance by making unemployment insurance systems more efficient. Benchmarking could be a way of converging on more sustainable and equitable social models. But reducing unemployment rates will also require better macroeconomic policies, on which the new Commissioner for Economic and Financial Affairs will have an important role to play.

The memos have all been written by Bruegel scholars and their preparation has been coordinated by Senior Fellow André Sapir. Like all Bruegel publications, the content reflects the views of the author(s), and there has been no intention to write a ‘Bruegel programme’. But the memos have been discussed extensively within the team to improve quality and ensure coherence.

Throughout the preparation of this volume, Bruegel’s editor Stephen Gardner has contributed considerably to improving the formal and substantive quality of the individual memos. Our gratitude goes to him as well as to all of those who have given feedback on drafts of specific memos.