This post studies why wages in Germany have not borne strong increases despite a relatively strong labour market. I list four reasons why announcing the death of the Phillips curve – the negative relationship between unemployment and wage growth – is premature in Germany. One of the reasons is the substantial immigration from the EU that I report. It was first published by bruegel.org and is also published in Germany by Makronom.

An important debate in the blogosphere concerns the possible death of the Philipps curve – i.e. the empirical relationship between inflation or wage growth on the one hand and the amount of slack in the labour market on the other hand. European Central Bank president Mario Draghi has recently confirmed his conviction that euro-area inflation rates will pick up as the slack in the labour markets closes. He expressed confidence that with sufficient patience, we will see an increase in inflation.

In this blog post, I analyse one important aspect of the debate for the euro area: wage developments in Germany. If Germany’s Phillips curve was dead and wages remained low, it would have far-reaching implications for inflation in the euro area as a whole. I find that the Phillips curve correlation is weaker after the crisis but is still present.  Recent wage demands in collective bargaining and wage settlements have increased, while the substantial increase in immigration from the EU towards Germany could have contributed to the more muted recent wage rise. Germany already has a higher participation rate than the euro-area average, suggesting that labour force increases may be more muted. As the slack falls, wages should increase.

Germany’s wage developments have continuously outperformed those of the euro area since 2010, while the opposite was true before 2010. The same is also roughly true for real wages. Yet, wage developments have still been low and disappointing in Germany since 2010, hardly surpassing the 2% inflation goal of the ECB. Since there is productivity growth, German inflation rates have been mostly below 2% since the beginning of the 2009 crisis. And of course, arithmetic rules require German inflation to be well above 2% if the euro area is to achieve a 2% inflation average, as several countries will still need to run lower inflation rates to regain relative price competitiveness.

Figure 1: Wage growth in Germany and in the Euro area, % change on previous year 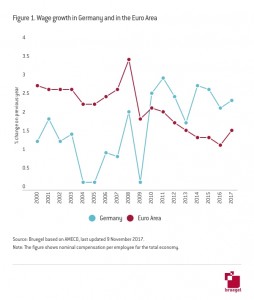 Here are four reasons why this worry is, at least, exaggerated.

For a start, Germany’s Phillips curve seems to continue to exist as Figure 2 shows. Nominal wage growth is negatively correlated with the unemployment rate. The relationship also holds for the more recent period since the beginning of the crisis, though it is less evident (i.e. the fit is lower). This suggests that as the unemployment rate falls further, nominal wage growth should increase. This, in turn, should eventually push companies to also increase prices. The Phillips curve also exists for real wage growth, which suggests that German workers also see their real income increase. 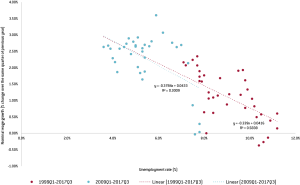 Second, the tighter labour market seems to gradually also lead to stronger increases in wage agreements in collective wage bargaining. One obvious example is the recent demand by the IG Metall union to increase wages by 6%, combined with demands for more flexibility on working hours. The increased demands are also starting to be visible in the economy-wide collectively agreed monthly earnings in Germany. As can be seen in Figure 3, in the second quarter of 2017 these have reached the highest increase since 2011. 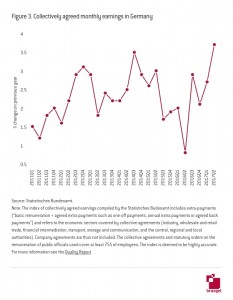 Source. Statistisches Bundesamt. Note: The index of collectively agreed earnings compiled by the Statistiches Budesamt includes extra-payments (“basic remuneration + agreed extra payments such as one-off payments, annual extra payments or agreed back payments”) and refers to the economic sectors covered by collective agreements (industry, wholesale and retail trade, financial intermediation, transport, storage and communication, and the central, regional and local authorities). Company agreements are thus not included. The collective agreements and statutory orders on the remuneration of public officials used cover at least 75% of employees. The index is deemed to be highly accurate. For more information see the Quality Report.

Third, there has been one major labour supply effect that may have dampened short-term wage increases for some time: immigration. A basic mechanism for adjustment to wage differences and unemployment differences in a monetary union should be immigration. Accordingly, one would expect immigration in Germany to have increased since the start of the crisis, as the German labour market was doing relatively well.

The table below shows that total net immigration from the EU into Germany has increased from negative numbers in 2008 to well above 300,000 in 2015. Gross immigration has more than doubled and reached more than 900,000. We are focusing here on intra-EU migration as it is for a great part directly linked to the labour market, while immigration numbers from outside the EU are heavily influenced by motives other than access to the labour market. Immigrants coming for family reunification or refugees and asylum seekers are often not integrated into the labour market immediately.

We also look at immigration from the entire EU, as the EU has free movement of labour – i.e. labour mobility can occur from any EU country and is not solely restricted to the euro area. In fact, it is well established that often workers from eastern Europe’s non-euro-area countries move to different countries in the ‘West’ but then are more quick to move away. For example, a Romanian may have moved in the housing boom to Spain before the crisis only to now work on a German construction side. The break-down across countries shows that much of the increase has originated from Poland, Romania and Bulgaria. Yet, the numbers of immigrants with Italian, Greek and Spanish nationality have also risen substantially.

The numbers therefore suggest that a still somewhat slow wage growth in Germany can at least in part be attributed to immigration. 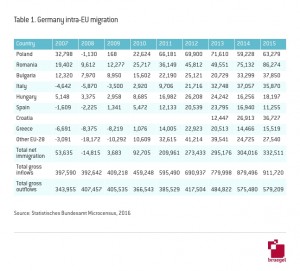 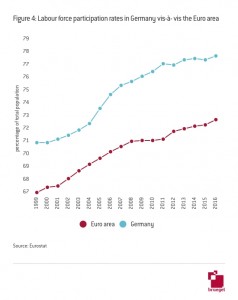 In conclusion, German wage and inflation developments are still quite low but there are encouraging signs that wage growth will pick up – and, with it, inflation rates. The slack in the German economy is certainly lower than elsewhere in the euro area. Immigration to Germany has played part of the role of adjustment to unemployment rates elsewhere, thereby also reducing the slack there and providing the ground for new wage increases. Overall, however, the adjustment is slow and wage settlements in Germany are certainly rather cautious. Yet, the Phillips curve is still alive and wages do adjust.