This post first appeared in the FT’s beyond brics blog.

Brazil’s economy and politics have long been playing with fire. Now the rest of the world risks getting burnt by waiting for the crisis to be addressed domestically. The country could learn a lot from Spain’s 2012 rescue package.

Brazil’s is one of the largest emerging market economies, close to the size of Germany’s. Its GDP is $3.2tn in purchasing power parity terms. It is the largest economy in South America, with huge knock-on effects on other countries in the region. It is also very financially open, making up nearly 7 per cent of the MSCI Emerging Markets equities index; its weight is even bigger in EM debt markets.

Brazil’s systemic importance has already been shown by the impact of its 2001 crisis on other EMs. Given this, one wonders where the IMF and G20 have been during the past few months. Brazil has not even been mentioned in any recent G20 communiqués. As for the IMF, it has offered only low-key warning signals. Yet Brazil’s economy is really crying out for an IMF bailout.

The fact that there has been no effective government in Brasília since congress voted on April 17 to impeach Dilma Rousseff, the president, should not serve as an excuse. Brazil has been agonising for at least two years. Some may argue that a leftist government such as Rousseff’s cannot be expected to approach the IMF for help. However, Spain’s recent experience with its own painful bailout shows that, when push comes to shove, survival becomes key.

No matter how unpopular the IMF might be in Brazil, there are always ways to tone down the IMF’s ownership of a stabilisation programme. Spanish authorities did their utmost to differentiate their programme from those of other southern European countries. Presentation is important, and Brazil’s new government should find ways to save face by pushing for the ownership of a stabilisation programme. The crucial issue is to act quickly and for the programme to be as credible as possible.

Brazil’s situation today has much in common with that of Spain between 2009 and 2012, when a €100bn rescue package was finally granted. Brazil is running twin fiscal and current account deficits and suffering from the deepest economic recession in a century. This was also the case in Spain. 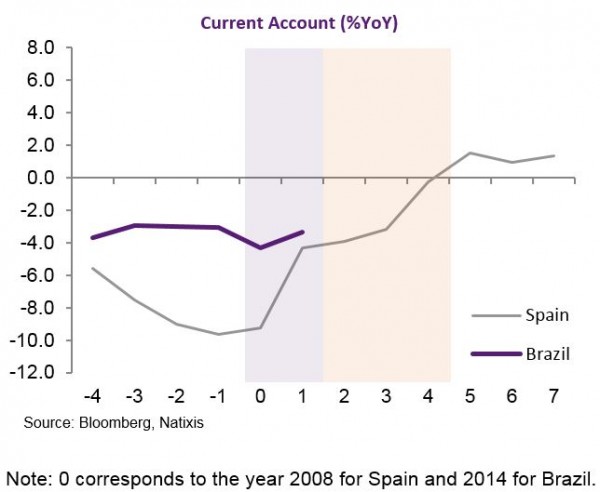 At least some of the underlying causes of the crises in Brazil and Spain are similar, too. Both countries went through ultimately unsustainable booms. In Spain’s case, it was a housing boom that collapsed in 2008, leaving huge scars both in the labour market and in the banking system. Brazil’s economy, in turn, benefited from a protracted commodity price boom, which left the country exposed to capital flow reversals.

The response to the unavoidable end of the boom years was massive fiscal expansion in both countries. Spain took its fiscal balance from a surplus of 2 per cent of GDP to a deficit of more than 10 per cent and kept it around 10 per cent for four years. Similarly, Brazil expanded its deficit from under 3 per cent to more than 10 per cent. 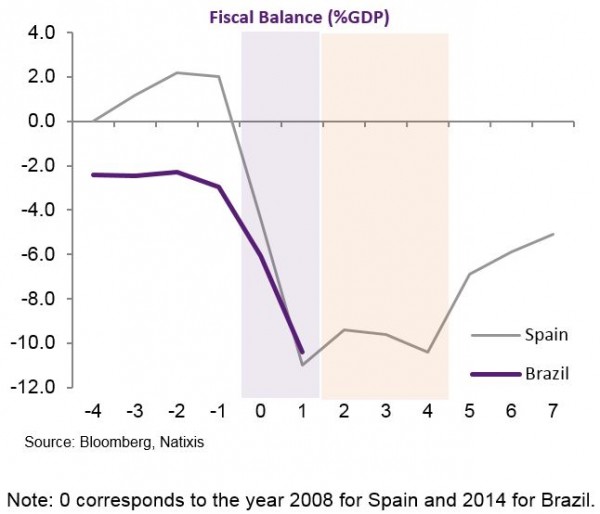 Spain’s large deficit, combined with unresolved problems in the banking system and labour markets, eventually led to a loss in policy credibility and a sharp increase in sovereign risk. Such high sovereign risk, for a country that was very dependent on external financing, resulted in the drying up of lending, inflicting severe damage on the corporate sector and on the economy as a whole.

In such a situation, it becomes imperative to quickly restore policy credibility. In Spain the limited IMF financial assistance programme achieved exactly this: it helped implement a number of key reforms, especially in the labour market and the banking system, while providing much-needed fiscal adjustment. In addition, abundant and cheap liquidity provided by the European Central Bank helped to turn around the economy, which, although still recovering from the crisis, is now one of the fastest growing of the eurozone. 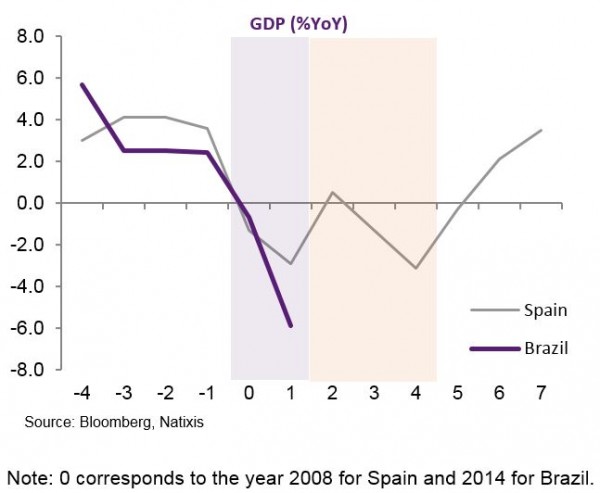 Until it accepted the IMF’s rescue package, the Spanish government was as much in denial as that of Brazil. The key was that the rest of the world, and in particular eurozone governments, kept on pushing for an IMF programme until they made it possible.

Based on the Spanish experience, we argue that Brazil must recognize its situation as soon as possible. It certainly cannot afford to keep its deficits at 10 per cent for another three years. It must implement a credible adjustment programme.

The IMF should stand ready to support Brazil through preferential funding rates and a well-designed programme. The international community, especially the G20, should make clear Brazil’s importance to the global economy, so that support is expected. As for Brazil, thinking about how generally proud Spaniards accepted their “medicine” should help them disregard the stigma that IMF programmes are said to bring, no matter how difficult this might look at first sight. There is no time to lose.

Note: There was a factual mistake in the original version of this post. It was indicated that Spain’s 2012 rescue package was from the IMF, which is incorrect. This has now been corrected.