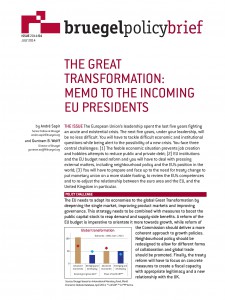 The European Union’s leadership spent the last five years fighting an acute and existential crisis. The next five years, under your leadership, will be no less difficult. You will have to tackle difficult economic and institutional questions while being alert to the possibility of a new crisis. You face three central challenges:

The EU needs to adapt its economies to the global Great Transformation by deepening the single market, improving product markets and improving governance. This strategy needs to be combined with measures to boost the public capital stock to reap demand and supply-side benefits. A reform of the EU budget is imperative to orientate it more towards growth, while reform of the Commission should deliver a more coherent approach to growth policies. Neighbourhood policy should be redesigned to allow for different forms of collaboration and global trade should be promoted.

Finally, the treaty reform will have to focus on concrete measures to create a fiscal capacity with appropriate legitimacy and a new relationship with the UK.

Bruegel Policy Brief 04/2014 is addressed to the incoming Presidents of the European institutions. It is the first in a series of memos to the new European leadership to be launched in September, which will address individual Commissioners with priorities for their portfolio. Take part in the debate using hashtag #EU2DO.